SHAW 2016: The 4 Most Steampunk Places of Riverside

Yes, Silver Goggles is once again participating in Steampunk Hands Around the World!

Folks may or may not be aware that currently, I live in Riverside, California. I'm not a fan of Riverside, exactly: the sun is aggressively hot and bright for too many months of the year; it's too dry; Southern California does not believe in public transportation; affordable housing apparently does not exist. That there are palm trees everywhere also gets on my nerves: they don't belong here, they're here only for the "exotic" feeling which is pretty pointless, and the desert could use more good desert-loving trees that provide shade to its inhabitants. I am not, however, the architect of this region.

Fortunately! Not all is lost on me here in Riverside. Today, I give to you my four favourite spots in Riverside that I try to make people aware of. Two of them are right downtown, and if you visit, I will make sure to take you there.

The Mission Inn hotel and spa is neither a mission nor an inn. It began as a humble boarding house in 1876, and Riverside's most eccentric figure, Frank Miller, took it over from his father and began really developing it. Now, it is several stories high and comprised of some five different wings, each built in a different time period with a slightly different aesthetic; there is a Spanish wing, an Oriental Garden, a Rotunda, and a Cloister. It was designed to be the hub of commerce, and Frank Miller owned most of Main Street back in the day.

Tours are led by a docent most days of the week, and I will happily spend the $16 to follow the docents around.

Frank Miller was a magpie at heart--if he saw something shiny that he liked, he bought it home, and put it somewhere. This means that the collection of stuff accumulated in the Mission Inn is pretty unique. And he would keep the extra stuff in the basement, and price most everything on display. When a guest bought something, he simply brought something else up from the basement to replace it.

And like a steampunk, he never catalogued the stuff and so nobody really knows the details of where he got things.

They are from all over, some with incredibly interesting stories. For example, the chapel altar! He bought it, sight unseen, from a Mexican silver-mining family down on their luck, and it came in by train in thirty-something separate boxes packed with used stable hay. It sat in one of the ballrooms for a while, while Frank Miller figured out what to do with it. Then he got Tiffany windows (which have their own story!), and had a chapel built especially for these pieces. 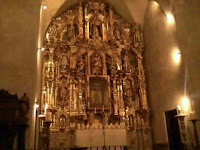 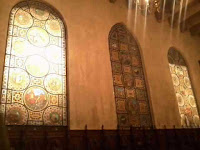 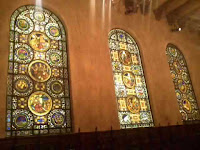 Many things in the Mission Inn were built by local artisans if they weren't bought. And like good steampunk art, they bring in disparate pieces that cohere into their own aesthetic that evokes the past and the present, to take their history into the future with them.

Where to begin with Tio's Tacos? A restaurant with three separate dining areas: indoors, a patio, and a chapel courtyard. When the owner, Martin Sanchez, started it in 1990, having arrived in the States, the first thing he noticed was how much garbage Americans generated. He came from an incredibly poor background, and so he decided to contribute to his new home, he would start recycling the garbage from the kitchen as art pieces.

This is where you'll find structures built of glass bottles cemented together. There're large people made out of cans out back. Stuffed toys rescued from the landfill populate the trees. Every corner of this half-acre of land has got some visual treat. It's a nice place to hang out, yes, but if you come with me, I will drag you around to show you the water-feature with flagstones and lucha libre fights and ant sculptures. You'll not miss the giant mermaid and the fellow standing on his hands.

Every few months, Sanchez builds something new, so it's always worthwhile going back just to see what has changed.

There is this park on Iowa Ave, called Hunter Park. It was owned by Joe Hunter, an industrialist, who loved steam locomotives, and saw their decline. So he built Hunter Park, with a little train track running around it, and left it to the City of Riverside when he passed. Now, of course, the City didn't have the faintest clue what to do with it, so they handed it over to the Live Steamers Society, who still maintain the park to this day. (There will be a new Metrolink station there in a few years.)

To maintain it, the Live Steamers Society give free train rides to visitors every 2nd and 4th Sundays of the month! You just wait at the "train station" and sit on the little train, and around you go! It's a good ten minute ride, very satisfying. I've gone at least thrice, and each time it's families with kids and joy. 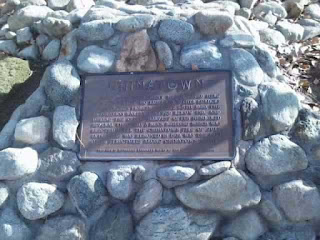 Riverside Chinatown is one of those little miracles of humanity that give me hope about how we think about our communities and histories. There used to be Chinese businesses in Riverside downtown, but in 1885 (which would be a few years after the Chinese Exclusion Act), new ordinances forced them out. This second site of Riverside's Chinatown is along Teqesquite Ave between Palm and Brockton. There is a marker at the corner of Teqesquite and Palm.

Mostly it is now an empty lot. By the 40s, only one resident, Wong Ho Leun, was left, who hung onto the land until his death in 1974. In the 80's, there was an archaeological project to investigate the remains. Attempts to commercialize the site have been unsuccessful. (You want to bet that Hungry Ghosts have something to do with this?) 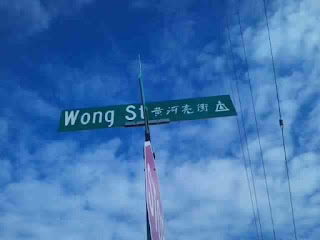 Riverside Chinatown is an example of the local community rallying around to preserve a piece of the city's history. The Save Our Chinatown organization has been working to convert the area into a heritage site since. I hope that it will be able to retain what is historical about it, while being allowed to evolve into something new, bringing its near-forgotten past into the future with it by resisting attempts to forget it and wipe it from public memory.

So go visit these places when you are in town. They are super historical!
Posted by Jha at 5:43 PM