I was at Steam on Queen in Toronto yesterday, and while there, ran into Theresa Breaux, with whom I've had good coffee and museum meanderings, and Priscilla Dixon, a local Ghanian-Canadian whom I met at Fan Expo 2010, and immediately lost touch it. She looked familiar, so I approached her for a picture, and asked her name, and re-acquainted myself.

Some of you may know her as Steampunk Storm; it's a pretty bitchin' cosplay.

Anyways, while we three congregated, we began counting POC, as one does as POC in a pretty white-saturated crowd. Theresa had gotten up to 8.

"Damn, girl," I said. "I think ya'll hit your quota, especially for a space this small." (I have no official numbers on how many attendees there were, especially steampunk attendees.)
Read more »
Posted by Jha at 8:08 PM 3 comments:

I'm pleased to be part of the launch of the Cultural Imperialism Bingo Card, designed by Aliette de Bodard, Joyce Chng, Kate Elliott, Rochita Loenen-Ruiz, @requireshate, Charles Tan, @automathic and @mizHalle. Launch orchestrated with the help of Zen Cho and Ekaterina Sedia in addition to above authors.

I've talked about cultural appropriation here a lot, and neocolonialism as well, and neocolonialism can manifest in the form of cultural imperialism. I could talk at length about this, but if you were wondering what are some general sentiments that cultural imperialists spout, here is a handy dandy Bingo Card for you to play with the next time you're watching a discussion about the Third World had by (usually white) First Worlders unfold before your eyes, whether online or off. Strike any statement that comes close and see how long it takes for you to get Bingo! 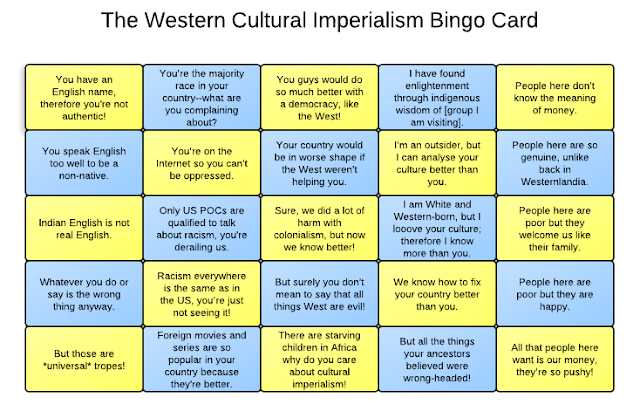 I should probably add that all the statements in this card, we didn't have to make up. Most of us have seen these sentiments in comments sections, or just said outright to our faces. It's pretty incredible, yea? Not, not really. Sigh.

For March, Disabled Life Media, a site that showcases media that highlights the creative talents of people with disabilities, did a steampunk photoshoot with disabled folks looking for a leprechaun's pot of gold. It is super adorable and really cool, good application of the steampunk aesthetic and all-round fun photo story.

A lot of non-disabled folks in steampunk like to pretend they have some form of disability, and there's not a whole lot of room for actual disabilities in our spaces that I've noticed. But obviously, steampunks with disabilities do exist; people with disabilities can pull off steampunk really well, and here is proof of their awesome.
Posted by Jha at 5:56 PM No comments:

So here's the first of a triplex con report! After my Fantastic Narratives conference in Halifax, in which I delivered my paper on Avatar: The Last Airbender, I flew down to the Austin airport on Thursday. The flight was especially pleasant because one of my fellow flyers was a guy I recognized from my time as a SMU Drama Society rabble rouser.... he was one of the campus security commissioners and I have many memories of having to calling down to unlock something or another, or turn off alarms, or something.

My flight was delayed by about an hour, but when I landed, Sixpence was there, with Aetherfest staff member Jasmine, because they had picked up Erica "Unwoman" Mulkey just an hour before, and thought to hang around for an hour instead of driving into San Antonio and back out.

This is Aetherfest's second year, and it's headed by Mr. Saturday and Sixpence (Pablo Vasquez and Cameron Hare). I met them at Steampunk World's Fair 2011, where I got to hang out in their room party the night I arrived, and ate some free pizza on Pablo's dime. Special Guests this year included Doctor Q of the Artifice Club, the aforementioned Unwoman, Marquis of Vaudeville, writers O.M.Grey and Lia Habel, and the Wandering Legion of Thomas Tew.

The Steampunk Postcolonialist at SF Signal!

Fabio Fernandes, who I interviewed earlier regarding the anthology of postcolonial SF he will be editing for the Future Fire, in turn asked me to participate in a roundtable about postcolonial SF, answering the silly question, "is it essential to belong to a culture that one is writing about?"

So I gave a 9-paragraph answer purposefully deflecting the question because I am so tired of it, and instead countered with a question and completely different frame for the problem.

There're answers from other steampunk writers too! Joyce Chng and Ekaterina Sedia participated, as did Steampunk Bible editor Jeff Vandermeer. Go check it out.

It's the first Friday of the month, all over again! Time for another steampunk POC interview, and today, Nivi Hicks of Salt Lake City, Utah, claims the spotlight! Nivi's been seen in her Bombay steampunk outfit, and her style threads influences from South Asia and the Middle East. She's also one of the organizers of SaltCity Steamfest. Without further ado, Nivi Hicks!

I'm a steampunk enthusiast and supporter within my community here in Utah. Events, fashions, icons, you name it, I try to support it. I've even taken up the reigns with a group of fellow steampunkians to create Utah's first ever Steampunk Convention, SaltCity Steamfest. Eventually, I would like to expand into fashion as a model more.

When asked "what is steampunk?!" what do *you* say?

My escape that lets me dress pretty without having to live to a cookie-cutter expectation (like cosplay can do). It's what happens when you take the industrial revolution, lengthen it, add steroids a more exciting history and technical output, some lace, and fantasty, va-la!