Racist Things Steampunks Are Not Immune To: Looking for Other People's Hurt To be Offended By

So this morning I woke up to like two emails about the exact same thing: some nonsense-filled thread talking about "how to not offend people" when it comes to multicultural steampunk. And a cursory glance through the emails, which copied the exact same Facebook thread, proved to me once more how impossible it is to talk to white people who don't want to change their mind about what offensiveness is and what not to do.

While I am certainly pleased to say that there are people who are definitely aware of the implications of what they do, even in some fuzzy way that they wouldn't be able to articulate properly even if their lives depended on it, I am also very well-aware of the fact that there are a ton of people... shall I say, LOOKING FOR OFFENSE.

The offence comes in the form of some perceived limitation of their actions and options. Well OK, you were looking for offense, so here is some.

There are some people who will set up strawman arguments about how POC are looking for things to be offended by to the point that these poor folks feel like they're walking on eggshells everytime they move.

"I can't wear a pith helmet," they will whine, "because then it would be colonialist and thus offensive!"

"I can't wear a kimono," another set will whine, "because then it would offend Asian people!"

"I can't incorporate gypsy styles," some more will whine, "because then I'd be accused of appropriation!"

Can we even consider the absurdity of these statements?

You CAN'T because then... someone will remind you why it sucks for them to see you wearing it?

You CAN'T because then... someone might tell you off and express their anger at you doing it?

You CAN'T because then... someone will remind you they are hurt that their culture has become a commodity item, while they're trying to live their daily lives trying to gain recognition as human beings?

That's so fucking self-centered I can't even begin to fathom the amount of sociopathy it takes to not empathize with the person who you perceive is being "offended".

It's also really fucking self-centered because then it starts being all about YOU, and how YOU CAN'T. There is no empathy for anyone else in such statements. There is nothing at all in these statements demonstrating you understand the large-scale problems behind these statements and behind what, exactly, makes these actions so problematic.

Someone expresses anger that you done fucked up again? It's about YOU, and YOUR ANGER, and how YOU FEEL about being put on the spot and made to feel guilty.

I get comments on here sometimes, people looking for offense saying, "well now I know but you didn't have to be so rude about it."

How fucking long have I been writing this blog? Since 2009, folks. 2009! And we STILL have these conversations. And people STILL fuck up. And well-meaning allies whom I do adore STILL get awkward and remain unable to fully articulate in a clear way why this is a problem.

If politeness got us anywhere, I'd still be writing on here on a regular basis, reviewing white-written work about POC and dealing with the pain I get everytime I see potentially good work ruined because it's clear this person just doesn't talk to a wide range of POC who have various diverse experiences with oppression. Let alone other white people on various axes of oppression, gosh!

"Steampunk is just fantasy!" cry these assholes looking for things to be offended by.

Well then don't let your fantasy ruin mine!

"People aren't perfect!" whine these assholes looking for offense in perfectly reasonable requests to not do certain things which may cause harm.

Well then go fuck up on your own time and in your own goddamn space! Not where I can see you, not where other people can be collateral damage!

Because I wanna do what I want too. I want to have fun in steampunk and have great discussions about how steampunk can teach us real history and help us have conversations about the past and how it has been so skewered and mis-read by historians as a site of culture and knowledge and I want to have wonderful dialogue with wonderful people coming up with strategies to help ameliorate current suffering that came about because of the history we want to re-imagine (because mark this: solutions can never come about through ONE PERSON alone, it comes out of cooperation, willingness to listen, and honesty about the problem and if you expect a singular person who notices a problem to come up with a solution on their own, you fall back on individualist hero thinking that got us to where we are in our selfish, self-centered society today).

And you know.... despite all that, I STILL do this. And I CAN do this. Even with assholes railing against our work in trying to point out the problems because they're more keen on digging in their heels to defend their freedom from knowing about other people's hurt and anger, even with ubiquitous louts who aren't willing to even admit that there is a problem or if there is one it's really not that bad and I will still do this even though I know, at every event out there I'm going to come across at least ONE of these irredeemable sociopaths who just wants to look for offense in what I do.

Because my love is stronger than your ignorance. It is fed by the knowledge of past wrongs never uncovered to the light of day because we are too afraid to reckon with it, and it is fed by the rage of knowing past wrongs still surface in different ways today, and it is fed by the pain I feel that every thing I consume, every move I make, every cent I spent, is part of a machine built by greedy people and run by their fearful, perhaps innocent minions and oiled by cowards.

And yes, my love manifests with fury and vengeance, and if you cannot fathom how this can even be, yet allow that injustices will happen and you don't have to hew your mind to fully comprehending your place in it, you're not as open-minded, or as inclusive, or as welcoming as you like to think you are, because you cannot seem to accept that there are variegated ways of being and doing that are beyond even your measly comprehension.

So yeah, go ahead, go DO that thing you want to do! Just don't limit the reactions you're going to receive from them... because that's not welcoming either. Don't try to tell people how they SHOULD react to you. Frankly, I highly doubt anybody is going to engage with you out of the blue about your offensive-ass costume because if you had the brainlessness to even wear it out in public, you probably wouldn't have the peace of mind to handle any criticism of it without doing some crazy mental acrobatics justifying that shit you're wearing. I don't know, maybe you do, there have been such miracles in the past. (How sad is it that this is a miracle to us?)

Just do it far away from me. The fandom's big enough, right? 'Cos I'm certainly not looking for fuck-ups anymore and I don't even have to because people keep pointing them out to me. I got better shit to do, cut me a break and go fuck up somewhere else.

But never mistake that I am offended by anything anymore... no, I've COME to expect this sort of racist shit. I'm done having high expectations for you folks.

And you people "afraid" of giving offense... you sure do take a lot of offense when being told you've being offensive. 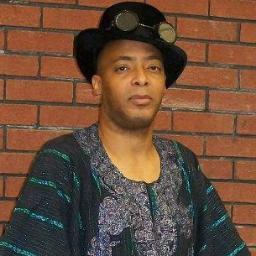 It's 2013! I surprisingly have not run out of POC in steampunk to interview! How about that. And kicking off this year is Atlanta-based Balogun Ojetade, a strong proponent for Black steampunk like no other steampunk I've ever come across. Balogun has a long history centering blackness in other genres of writing, and he burst onto the steampunk scene with Moses: the Chronicles of Harriet Tubman, a steampunk take on the legend herself.