Sometime last year, I received an email from the proprietor of Steampunk Goggles, Dennis Consorte, for a plug on the site, possibly a review of goggles. Yes, this was last year, as in 2013, when I had practically no life, because grad school. I did not reply because of school, among other reasons.

Among the other reasons is the fact that I... don't really wear goggles.

I have nothing against goggles, although I find their ubiquitousness a bit strange at times. Of the general ways to steampunk an outfit, goggles come out top. They give an air of Adventure, which I have spoken of before; airship adventurers wear goggles, so wearing goggles, even though few of us will ever be in a position to really use them in the air. They also give an air of Mad Science! because, when you are in a lab, you should wear goggles, in case things fling themselves at you and your eyes. (In the local Makerspace, they are very adamant that you wear some sort of protective eyewear.)

A huge part of why I don't own a pair of goggles, and generally do not buy them, is because from the age of 9, I have worn spectacles. My prescription lenses are 6.25 and 6.25. They have shaved close to 6.75. In the last twenty years I have averaged one new pair of glasses every year, although some old pairs have lasted me for about three of four years, depending on make, brand and how rough I have been with them. (In the local Makerspace, glasses count as protective eyewear.)

I am not a careful person with... anything, really. It's a reason why I don't have a smartphone and if I could, I would buy ruggedized phones and laptops all the time. I don't because the options are so shitty. I would like to have been one of those people with those little jeweler's lenses in front of the main spectacles, except I think I would have broken them within a couple of days wearing them. So, those glasses with jeweler's lenses were right out, despite being elegantly steampunk for my sensibilities and practical daily wear.

Goggles... don't usually come with prescription lenses. As a person with glasses, I would have had to wear contact lenses in order to wear goggles. And I have done it! Worn contacts to wear sunglasses, that is. But contacts + goggles always seemed like a bad idea to me because what if my eyeballs can't breathe?! So I'm not seeing any better because now my eyes are gummy from the contacts and can't breathe. That was my theory anyway. Since I never owned a pair of goggles I've never really tested the veracity of this suspicion. Maybe someone else can!

So instead most of us be-spectacled folks wander around with goggles on our headgear, giving us all the form of Adventure and Mad Science without the function. I suspect this is the case even for folk who don't need spectacles.

Recently, I went for laser eye surgery. It is somewhere in the realm of a couple thousand dollars because my family is nouveau-riche and my father told me that if I wanted to get it done, to get it done soon so I could make the most of it before old age started the degeneration process on my eyes once more. With the rising costs of glasses that actually fit me and don't drive me up the wall with how unbelievably ugly they are on my face (I have a rather flat profile, and a low-bridged nose, so most glasses just kind of slide down uncomfortably) I thought, well, I might as well get LASIK, since I'm turning thirty.

(Yes, I managed to reach the age of thirty despite being convinced, in my teens, that I would die sometime past age twenty-one, and many depressive-occasionally-near-suicidal years after.)

The problem of eyewear does not, in fact, go away with the corrective eye surgery. I just got a new set of problems. The first one was finding a new pair of sunglasses to wear post-surgery; partly to make my eyes comfortable after having, you know, a shaft of light shining in to burn away pieces of tissue, and also partly to, I suspect, hide the fact that post-surgery eyes look either watery or bloodshot or both. In my case, I was tearing up nonstop. I've never really been a "waterworks" kind of crier, but gosh, this day....

I will get to why this is relevant to steampunk eventually.

So apparently, aviator sunglasses have come back in full fucking fierce force. I am not sure what is the appeal of the aviator aesthetic, and suspect it has something to do with Tom Cruise's Top Gun and the continued romance of aerial adventures in them. Either way, they're hideous. If I found something that were not aviators per se, they were large enough to be like them. They were everywhere and they were the cheaper option. In the mall I shopped at all four eye-wear stores, and six other fashion outlets that I figured would sell some sort of eyewear. Eventually I gave in and went into an incredibly expensive luxury items store which I always wanted to buy hair accessories from but never did due to the expense.

Here is the other problem. My eyewear preferences lean towards those that are horizontally wide, not the vertically misshapen style of the aviators. Most of them, however, are built with plastic frames that have built-in nosepads, with no nose arms. These are built for people with hooded eyes and high nose bridges, whose eyelids are a respectable distance from the lenses. They are not good for people like me, with flat profiles and flat noses; the results are eyelids touching and staining the lenses, or eyelashes brushing uncomfortably against the lenses.

The ones that DO have nose-arms tend to have them pretty high, close to the bridge of the frame, which means that the whole pair will slide down and dip downwards so sometimes we only get to see three-quarters of clear vision unless we push our glasses up on our noses periodically. I had always wondered about the stereotype of Asians wearing those round spectacles, and it's probably because the circle of the spectacle frame means even if the nosepads slide down our flat noses we can still see.

I don't know, I'm just guessing, and someone ought to do a study. I do have two functional pairs of sunglasses, though, which I am thoroughly enjoying because Riverside is one of those interminably sunshiny place and I have discovered a distaste for sunshine after moving out of Canada into California. I can look out onto the world without constantly squinting now! I no longer feel like the daystar is out to get me by shining all over the place!

Now! Back to goggles.

I don't think I much like most of the goggles available on the market right now. My preferences for wide lenses on eyewear are not from an arbitrary sense of form; I generally like the full lens coverage that I get from these encompassing lenses. Goggles are usually these circles in front of eyeballs that are supposed to be focused on something right in front of the face. That makes me nervous. It makes me feel like a horse with blinders. Unless they are going to let me study microscopic things, I don't really need them.

So unless I find a pair of goggles that give me coverage and a wide field of vision, I don't support I will be getting one anytime soon. Which is still kind of weird considering the name of this blog (goodness is it really only a week away to my blogiversary?).

What am I looking for? Well it just so happens that I have a gratuitous selfie of a pair of sunglasses I bought back in 2005 that I still love and wear more frequently now that I no longer need prescription glasses! 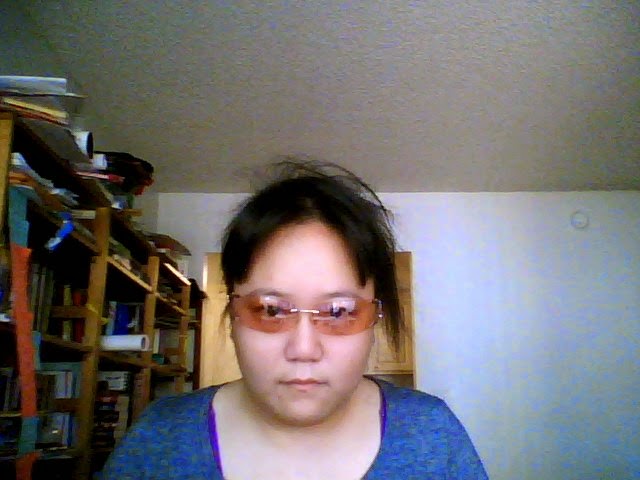 Note the wide lenses (and the attractive colour!) which I can barely see the edges of, when I look out the corners of my eyes.

And then there is this goofy thing: 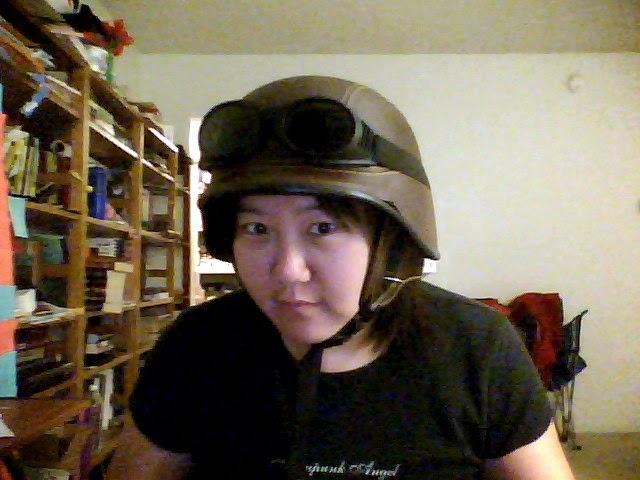 Goodness but that is dashing! I bought this helmet in Bali some years ago because of its steampunk-y look but I have never used it because a) I don't have a bicycle; b) even if I did those goggles would have had to be worn over my glasses (which I could have but it did not feel very stable); and c) without a bicycle this helmet is uncomfortable because it is ridiculously hot, like good grief no except in winter but I never had the appropriate outfit. I somehow managed to hang onto it through four countries (Indonesia, Malaysia, Canada, U.S.A.), and at least four moves.

But now I can do this! 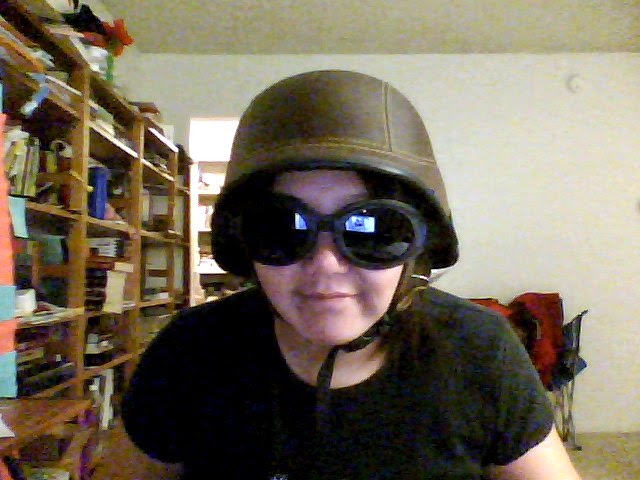 I've been wanting to do that since watching Captain America pull his goggles down from his helmet (at which point I went "OH so THAT's how it works!") in The First Avenger. The elastic is now a little worn so I have to replace it. The point is I have a bicycle helmet with pseudo-goggles.

So, I guess I will be indulging in some madcap adventures now! I have the appropriate headgear, with goggles attached that are also functional. I am dangerous, people, no one should have this much power!