Here we are, stop #2 on my con tour: Watch City Festival! Watch City Festival is held by the actual town of Waltham, hosted by the Charles River Museum of Industry and Innovation. Last year, it was called International Steampunk City, but this year, they renamed the event to tie it even closer to the city's history. Which I think is a pretty good thing! Steampunk is so awesome because of its specificities and ties to real history.

I could tell you about the conceit of Watch City being a parallel dimension linked to our planet for the weekend, but that's not as interesting to me as the fact that Watch City is a fundraiser for the Charles River Museum, which was flooded about three years ago. Monies raised from WCF go to restoring all the stuff in the museum. Which, you know, is pretty cool. Apologies for the dastardly lack of pictures in the following post.


This was in some ways the hardest con I've ever attended. The difficulty lay in a mixture of my issues with the venue and the fact that I was tabling for most of the day.

So the neat thing about this con is that it happens in a downtown, stretches over several blocks of town, includes several buildings besides the museum, and dedicates two large stretches of grassy places to hang out on.

So the hard part about this con is that it happens in a downtown, stretches over several blocks of town, includes several buildings besides the museum, and dedicates two large stretches of grassy places to hang out on.

What I'm trying to say is, as awesome as this concept is, with maximum exposure for the general population to run across us steampunks (although I understand a lot of people still didn't know what in blue hell was going on anyway) this is a terrible thing for those of us with very limited energy, especially during a hot summer day (which, admittedly, it was, the glorious sun was out, shining its despicable heat down on us ALL WEEKEND). I get that exercise is a good thing, but I would like someone to explain to me the reasoning behind making steampunks who are likely wearing several layers of clothing and carrying a lot of props to wander an entire downtown which can be up to a fifteen minute walk just to get one from venue to another, in the hot sun, like this is some good idea.

I mean, I get cranky in a large hotel like SteamCon's already, and that place is fuckin' air-conditioned.

As a result, I spent most of my time either at the venue where I had something going on, or at the Combustion Books table.

I arrived Friday afternoon (or Thursday night, the details are now fuzzy for me) after a long week of traveling with Magpie Killjoy and Pablo Vasquez, with many stops through the Carolinas and a night in Baltimore (with a day wandering around graveyards), and a stopover in NYC (wherein Smokey and Alana Robinson of Combustion Books very kindly gave me a couch in their office for the night).

My roommate was Wilma, who would be my companion for the rest of the May Madness. This was her first ever steampunk convention, although she's no stranger to dressing up, having been a member of the SCA for years and years. (I didn't see much of her this con, lol.)

Friday evening was one of reunions, and I attended Frenchy and the Punk's show! They have a new album out even! That was exciting. I hung out with the wonderful Holzman-Tweeds and generally got a feel for the downtown. 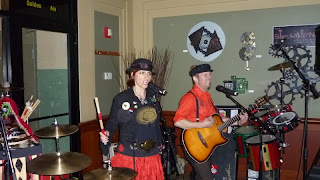 I got to see Baron Von Lahey, whom I'd just seen at Aetherfest the weekend prior, win the election to become Mayor of Watch City! 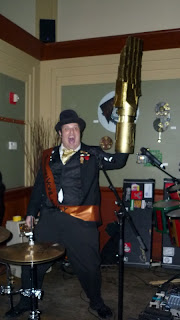 Alas, I had to miss the opening ceremonies the next day when he was given the key to the city by the mayor of Waltham herself. 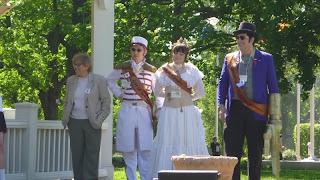 While at the same show, I also caught a bit of the Infernal Devices: 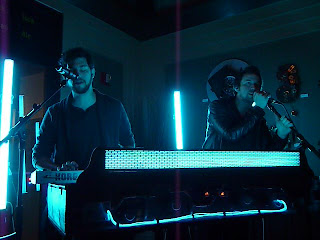 I spent most of Saturday morning helping Magpie set up the table and hunting down the badges for me and Ay-Leen the Peacemaker, as well as identify the venue for the presentations we had going.

Our presentation went well, well-attended as usual, and with too little time as usual. It was also in a remarkably small space -- we could seat no more than 30 people, and I think I'm overestimating. We were in the front section of the CDIA building, right by the front windows. For some reason, even though we specified we needed a projector, there was none! Good thing I got there super early to get this sorted out. People really need to remember that projectors are very important for us... I cannot for the life of me understand why we run into this problem approximately half the time.


In the evening, I sat in on the Steampunk Literature discussion where Magpie Killjoy, G.D. Falksen and Jean-Christophe Valtat, a scholar of Verne who's just released Aurorama. I renewed my acquaintance with Falksen, whom I haven't seen since SPWF 2010, and proceeded to roll my eyes at having, once more, a frustrating conversation where people tried to define steampunk and not get anywhere. I did interject, you know, because that's the kind of person I am, and Evelyn Kriete, sitting next to me, said, "would you like to sit up front with them??"

I'm pretty sure Eric said since there were so few of us, this was now more of a discussion group than a panel, so she can go fuck herself. But I was too polite. Plus, I forgot she was Evelyn Kriete (because she was not dressed to the nines like she usually is in her pictures, and I can tell you that Evelyn Kriete out of costume is still pinch-faced Evelyn but still prettier than Evelyn Kriete in costume) and as much as I dislike her generally, for various reasons, I don't exactly spend my time practicing snappy comebacks to anything she might say to me. She was pretty annoying though, what with the whole interrupting while people were talking just to make sure the authors were holding their books upright so people can see.

Shoutout to Eric Green of Back Pages Books, who ran lovely little events all week long and was essentially our book vendor. His is a lovely bookstore. On Sunday, he hosted the book launch for The Omnibus of Doctor Bill Shakes and the Amazing Ionic Pentatetrameter! It went well; Matt Delman and I read stories and talked about our projects. Unfortunately it veered into me talking about postcoloniality in steampunk because someone asked about my MA project. Which was OK! I got to talk about some things I didn't get to talk about at SATW the day before.

After this, I had to skedaddle to get some sushi and brought that into the room for Envisioning a Better Steam Society, again in the CDIA, but in the larger room at the back. Dave Gorden was giving his Edward Muybridge presentation, and it seemed to go on and on and on, even though technically we're supposed to finish a few minutes before the hour.

Because I'm an awful human being, I kept the door open and at 3pm sharp, I announced, "OK, let's invade!"

Envisioning was very well-attended, as usual. I don't mean to brag, but damn, this roundtable... give us a good time of day and the room will be packed, it seems. Ay-Leen handled the roundtable (she usually does when both of us are present) and I handed Viceroy Chang around.

It was a reunion this year again, because I renewed my acquaintance with Kat Zheng, who I met at SPWF 2011 (which I don't have a report of, for some reason). Last year, she'd asked, what would POC see in steampunk, as it was so rife with colonialism... a question that stumped her because her brother asked it. She had no good answers. And I guess she came back this year looking for more answers. It was very good seeing her again, so I adopted her.

I took myself off to hang out in Jake von Slatt's bus, just generally recuperating before dinner.

Dinner was a BIG affair with Jake, Tempest, Kat, Magpie, Wilma, and a couple other people whose names I don't remember. Ay-Leen came to stay with me and Wilma that night too, since we were her ride into NYC the next day. And we had a little room party, in which we drank vodka, to celebrate Ay-Leen's graduation!

So that was Watch City Fest! I'm not sure I'll go back again, since clearly I don't do well in large spaces like those, but I'm glad I checked it out at least.

I'm so sorry for how long these con reports are taking me. There may not be a con report for SPWF but I'll try, since there're many videos.