So, Steampunk World's Fair 2010 has come and gone! For an event that initially planned for 500, it swelled to 1,000, and at the end, the organizers estimated a crowd of 3,700 throughout the whole weekend! Congratulations to Jeff Mach of WickedFaire, Josh formerly of SalonCon, and Whisper and Cap of the SS Icarus for such a hugely successful event!

Unfortunately, I was still recovering from a cold at this event, and one of the results of this cold was a lost voice. So, for anyone who thought I was stand-offish and wished I talked more, I apologize! I can be very chatty at these things, but I thought it prudent to do as little talking as possible. I failed to keep my mouth shut most of the time, alas.
This was going to be a Very Serious Con Report, but to be honest, this was my very first convention, and Ay-Leen beat me to the punch with a really good con report at Beyond Victoriana, so, this will just be some general impressions, also because I neglected to take notes of the Roundtable and Steam Around the World.
Envisioning a Better Steam Society: Social Issues in Steampunk Roundtable
Unlike a regular panel, we chose a roundtable format, in which we sat in a circle. We had specific people talking to certain subjects, of course, but we didn't want to be speaking at folks, but with them. Hence, a circle, in which all the speakers blended in with the audience, thus becoming part of the crowd. This Roundtable was presided over by Ay-Leen the Peacemaker. We had ground rules, of course: don't be an asshole, listen, and if we wanted to speak, we were not to speak unless we had Viceroy Chang's permission. Viceroy Chang is a cross-cultural panda steamborg mandarin with a robotic eye and a fine coat: 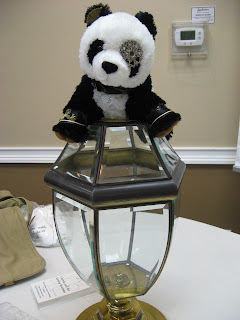 Viceroy Chang looking very important
We had more people than expected at this Roundtable. We had chairs enough for may 30+ people, and set them in a circle very early on. The chairs very quickly filled up! Not only that, but by the time we got around to starting, there were folks on the floor, standing around the sides of the room, basically filling up the space.
I sat on the floor in the middle of the room, and so I missed the fact that people were milling at the doors, and outside as well! Thank you so much for the enthusiasm, folks! And people say there's no punk in steampunk.
The roundtable got started off with Gender, and Emilie Bush and I led the charge. As a whole group, we touched on fashion, gender roles, the confusion of modernity with regards to "having it all" and not knowing definitively if that's what people want, the division of public and private spheres. We had both men and women contributing to the discussion (obviously more women, because there are more women than men among the speakers anyway). I had only one real substantial contribution: that of Dr. Celia Mosher, who conducted what may well be the world's first academic sex survey, preceding Kinsey by like forever. Because I'm a little sex-pozzie like that and just had to bring up that yes, Victorian women really liked sex.

When we got into Class, we were really getting into it. Jake von Slatt brought up the Maker movement as a reaction to the mass consumption that goes on in the mainstream, and I brought up how what we do and what we wear is indicative of the class we belong to. Spiralred, who I had met on LJ previously, discussed how class markers differed from region to region.

By the time we got to Race, we were swinging. I saw Ay-Leen looking at me as she introduced the topic, and I went right into it, giving a condensed version of my personal context from various other posts of mine. There was a lot of 101 stuff going around, and Moniquill, of Native-American descent, pointed out, "you keep saying the colonizers have left your shores... they never really left us here." And everyone applauded and  it was such an OH SNAP moment. I got told! And the rest of us did too. Great stuff. Professor Hoppingood, Emilie Bush's friend, played "devil's advocate" in bringing up how the Victorian era saw the rise of anthropology and archaeology. If I had more time, I would have gone in-depth on how this was Orientalism and how fixing the cultural data into place led to modern forms of some religions. But we didn't have time so you'll just have to be satisfied with the link.

We had some nice finishing remarks by a green-haired young man named TJ, who delivered the usual "we should all get along and not let ourselves be blinded by prejudice!" spiel, which was sweet and well-meaning, and it's probably a good thing our hour was up then, because I would have proceeded to devastate the speech, since I'm Bad Cop like that.

We moved to the bar area to enjoy CUPCAKES. We talked some more, and from the scintillating conversation, it was clear that this was an under-discussed topic, and we should be having more in the future.

Beyond Victoriana: Steam Around the World
This was a presentation with three parts: Why Multi-cultural Steampunk; A Catalog of Multi-Cultural Steampunk; and Hard Stuff. Once again, Viceroy Chang presided. We had some initial issues with tech, since the power cord for the projector was missing. Fortunately for us, Rob A, one of the SPWF staff, helped out. Thanks, Rob!

Ay-Leen and I plowed through relentlessly... kind of. Since this was our first presentation, and we hadn't really rehearsed beforehand, we probably spent more time discussing stuff and taking questions and comments than we needed. So we had fun in the first part, plowed through the second bit (with Ay-Leen often adding to what I had to say, because I'm sort of bare-bones with information like that, and she knows a lot more about some of those artistes than I did), and during the Third Part, we had a lot of very good questions, on the thoughtful 101 level, but still excellent nonetheless.

Also, Ay-Leen gave me permission to swear. So when a member of the audience asked, "What do you think of the casting for the live-action Airbender movie?" I got to say, "we think it's fucked up." Because it totes is.

I would have liked to have spent more time on the third bit, since there was a lot of really good conversation coming out of there. Perhaps next year, SPWF will give me and Ay-Leen a chance to have a roundtable on the subject. Cultural appropriation and respect are really hard to navigate, and I hope in the future there'll be more PoC at these events to have this discussion with as well.

Ay-Leen noted that at this presentation, a woman pointed out, "I saw 27 black people at this entire convention!" And she's right - at a convention 3700+ strong, that number is a bare sliver of actual representational numbers. Besides myself and Ay-Leen, I counted 6 other Asians. Of course, I wasn't getting around a whole lot, but still, that's a pretty small number.

We totally ran out of time towards the end to have a proper Q&A, so I gave out James Ng prints (because James is kinda awesome like that).

However! It was a great presentation, with a wonderful audience. We've already had some really awesome nice words from Leanna Renee Hieber and Jake von Slatt, but Ay-Leen and I are open to feedback, either by e-mail or in comments, so leave some love!
Posted by Jha at 8:00 PM